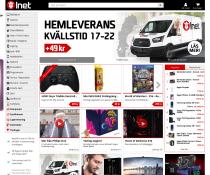 Online gaming is so addictive that though it starts as a pastime, it becomes life’s biggest passion. And once you are hooked normal, mass-produced computers aren’t enough as, especially when playing games for extended periods, normal computers can be subjected to overheating and can breakdown. Gaming computers or gaming rigs have special components added and existing components optimized to provide the best gaming performance and stability even when using the computer for extended periods. Inet is a computers and peripherals, store and a specialist in providing high-performance gaming equipment.

It is a popular destination for gaming rigs and all computer peripherals especially those related to gaming. Hence, one can purchase custom-made gaming computers, various types of computer components, gaming chairs, mouse, joysticks, etc. But Inet isn’t just for the gaming buffs. Everybody, be it, individuals, corporations and businesses come here for their entire computer and computer component related requirements. Hence, one can purchase computers, computer components, storage devices, printers, software as well as smartphones, electronics and home appliances here.

With a wide product range, great pricing and great support staff, Inet has earned the reputation for being the best in customer experience including being named the best Computer store in 2015. The company is so interested in customer welfare and satisfaction that each and every one of their staff is trained to ensure that they are knowledgeable enough to provide customers with all sorts of information and help choose the right products.